A topsy-turvy year but a happy ending 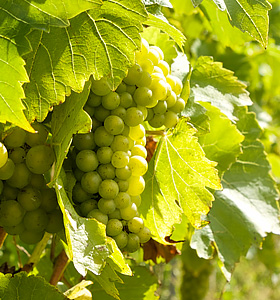 2017 has been a topsy-turvy year but luckily it has a happy ending!  We started the year with a very balmy early Spring.  The buds burst early and the vineyard was an incredible sea of light green, fresh shoots.  Then the dreaded frost came. Much talked about in the media, the frost hit most vineyards in the south, including us. We had two days of pretty severe frost which decimated 70% of the buds, only the 30% which had vineyard candles were saved. The day after we dashed to our vineyard equipment supplier and managed to buy a second-hand frost buster. Essentially a marquee heater on wheels you pull behind the tractor in the coldest hours of the night.  The next week we again had two very cold nights and the frost buster saved the day (or should we say night!) and we managed to keep the buds we saved the previous week.  It was a stressful time.  Luckily vines have secondary shoots. These buds are not as fruitful but produce leaves and therefore chlorophyll and save the vine. And luckily produce some fruit.  The chardonnay and pinots produced 50% of the previous year’s harvest, while the seyval blanc was on absolute fire and yielded nine tonnes over three acres.  The summer was sunny and warm but ended on a wet note at the end. October, however, turned unseasonably warm.  We hope 2018 will be a little bit more normal!

Sign up to our email newsletter for all the latest news, events and offers from Oxney Organic Estate.